7 Things That Are Illegal to do in National Parks - Slingshot Zion
431
post-template-default,single,single-post,postid-431,single-format-standard,bridge-core-1.0.4,ajax_fade,page_not_loaded,,qode_grid_1300,footer_responsive_adv,hide_top_bar_on_mobile_header,qode-content-sidebar-responsive,qode-theme-ver-18.0.9,qode-theme-bridge,disabled_footer_bottom,qode_header_in_grid,wpb-js-composer js-comp-ver-5.7,vc_responsive

7 Things That Are Illegal to do in National Parks

Posted at 17:52h in Uncategorized by admin
0 Likes

National parks are some of the only places in the nation where you can enjoy a region’s natural beauty and landscapes without traffic lights, neon signs, or other hazards of civilization. But just because you are out in the wilderness doesn’t mean that there aren’t rules and laws that have to be followed. Keep reading to learn 7 things that are illegal to do in national parks. 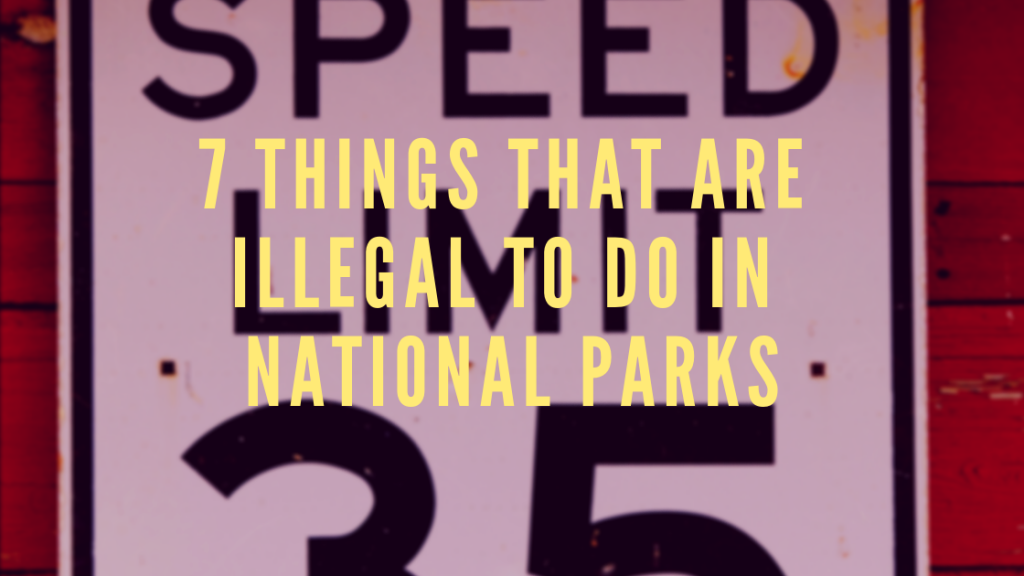 The first thing you’re likely going to want to do when you climb behind the wheel of your Slingshot is to take off. But while national parks like Zion certainly feel like you’re in the wilderness, keep in mind that they are federally owned and protected, with rangers and other officials on constant patrol.

Speeding is not only illegal, but also easy to do, as speed limits are often quite low in national parks. But even if you were allowed to drive faster, you wouldn’t want to; crowds of tourists and wildlife on and near roadways require you to drive cautiously throughout the park. Many of Zion’s roads are also narrow and winding, with sharp turns and even sharper drop-offs on either side.

Dreaming of capturing a stunning birds-eye view of you driving that Slingshot through red rock canyons? Don’t attempt to do so within park boundaries.

The National Park Service put a quick end to the drone trend in 2014 when they banned their use on all federally protected lands. Many cities and other public lands are also banning their use, so always check local legislation before breaking out your drone.

3. Entering the Park During a Government Shutdown

From the end of 2018 into the beginning of 2019, the U.S. government faced a lengthy shutdown. This meant that many government departments and operations shut down and employees went without pay. One major department that suffered during the shutdown was the National Park Service.

Dozens of national parks, monuments, forests, and other federally-protected lands were closed during the shutdown. And even though those lands belong to the people, it was illegal to enter them during this time. This would stand true for future government shutdowns as well.

Several parks were an exception to this rule. They remained open during the shutdown, though facilities like restrooms were mostly closed, road maintenance and trash collection ended, and park rangers were absent or severely understaffed.

Luckily for visitors to Utah’s Mighty 5, including Zion National Park, these parks did remain open during the shutdown. The state of Utah stepped in to pay for staffing in visitors centers and to keep custodial services up and running in their parks during the shutdown so that visitors could continue to enjoy them over the holidays.

Most visitors to national parks go home with a souvenir or two. And you are more than welcome to pack your bag full of postcards and t-shirts. But try to take a natural souvenir home and you may wind up in trouble.

It is illegal to remove plants, rocks, fossils, or any other natural items from the parks. Even antlers naturally shed by deer are protected, and cannot be removed. In some parks, you may be able to purchase certain items, like plants or fossils. In others, you may be permitted to collect seashells or even pick berries. But you should always check with park officials before doing so on your own.

This is another obvious law in the parks, mostly because its a law everywhere you might take your Slingshot.

Every day, 29 people in the U.S. are killed in auto accidents involving a driver under the influence of alcohol. When it comes to the sharply curving, narrow roads of southern Utah and a heavy dose of tourist traffic, the risk of deadly accidents becomes even greater when alcohol is involved.

The exception to this rule in the park is Pa’rus Trail, where well-behaved pets on leashes are welcome. Service animals are also allowed throughout the park.

Camping in Zion National Park is a great way to get up-close-and-personal with nature. But while you can camp in the backcountry or in one of the designated campgrounds in the park, you can’t roast your s’mores just anywhere.

Wildfires are a deadly, destructive risk to national parks. In an effort to prevent them, the park service prohibits campfires outside of fire rings in campgrounds or with a backcountry fire permit. However, even these become illegal if the park raises their fire level threat.

A Slingshot rental is a great way to experience a different side of Zion National Park and other parts of southern Utah. But whether you’re zipping down the road with the wind in your hair or hiking across the desert, following the rules will ensure that you can enjoy your time in the wilderness rather than spending it in a police or ranger station. 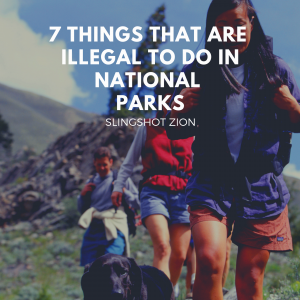